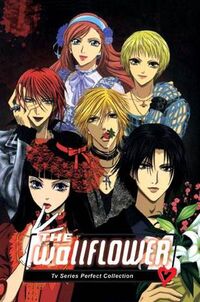 Because the manga's creator, Tomoko Hayakawa, is an avid admirer of J-Rock singer Kiyoharu, it was decided that Kiyoharu would perform the theme music for The Wallflower anime. His songs, "Slow" and "Carnation" play over the opening and ending themes, respectively. The songs were a collaboration between Kiyoharu and Takeshi Miyo. The background orchestral music was written by two respectable Japanese composers, Hiromi Mizutani and Yasuharu Takanashi.

The opening theme "Slow" plays over recycled footage from the first episode, and is more of a love ballad. Episode 14 onwards shows the second version of the opening sequence which portrays more original footages. Whether this change was made due to growing popularity or the initial reception is unknown.

The first closing theme, "Carnation", the more upbeat of the two, is set to a small computer animation of Hiroshi dancing in the corner as the credits scroll up the page.

∞Changing∞, the second ending theme by Bon-Bon Blanco, presents the viewers with an even faster rhythm while preserving the use of computer animation (Hiroshi, Josephine and Akira dancing to the song) in the sequence.

Retrieved from "https://wallflower.fandom.com/wiki/Anime_Series?oldid=5436"
Community content is available under CC-BY-SA unless otherwise noted.